It’s that time again! Time for the Monthly DIY Challenge where some of my talented blogger friends and I take the same basic craft supply and turn it into something fabulous! This month we’ve chosen the ubiquitous clear ornament, which seems perfectly fitting for December, if you ask me!

Being perfectly honest, I found this challenge to be, well, quite challenging! Pinterest revealed that every single ornament idea I had was “so last year” (or the year before, or the year before that).  Luckily, my mom and sister were more than generous with alternate suggestions, as we had a lot of time to think about this during a recent weekend stay at the hospital with my dad.  One of the many ideas was to turn an ornament into a snowman.

And so . . . please let me introduce you to my new clear ornament snowman friend, Pierre.  He’s channeling his inner Frenchman with his jaunty cap and fashionable scarf.

When he’s not being photographed for his Pinterest portrait, he likes to hold a little sign that makes me want to punch him, as it reads, “I love the Polar Vortex.”  (I swear to you that if we have a winter like we did last year, I will move to the Bahamas (with or without my family).) 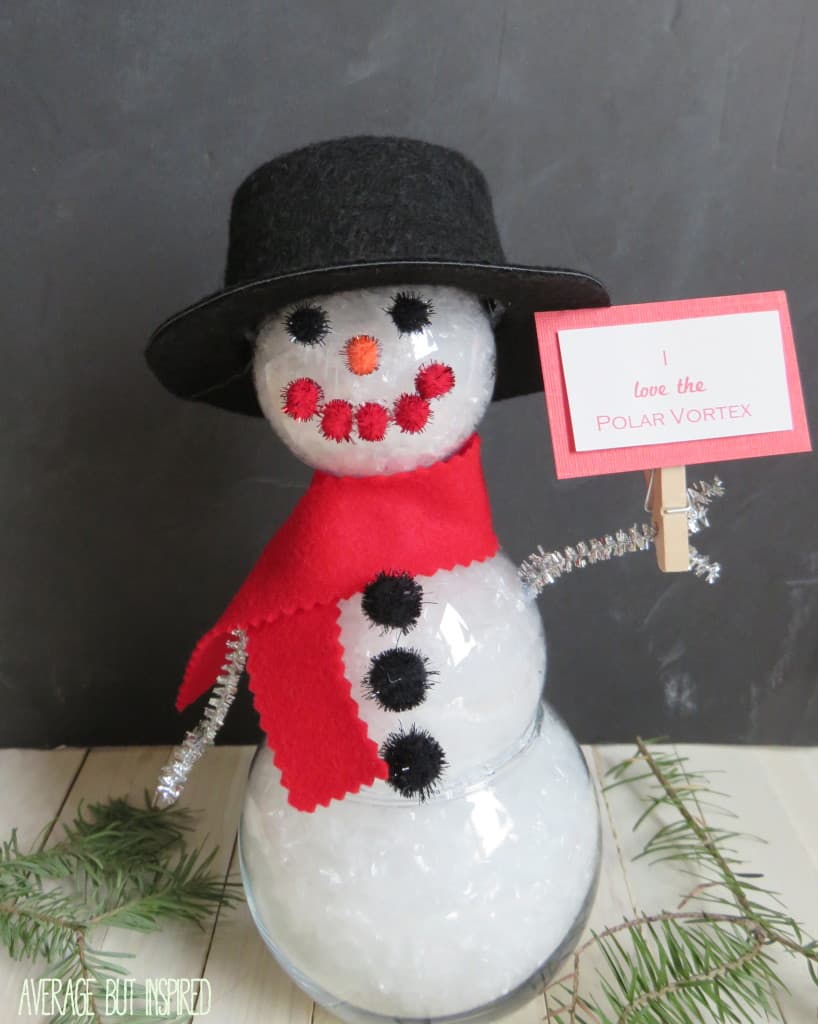 Anyway, to make him, I used these supplies:

The first step in creating Pierre was to fill the fishbowl vase and both ornaments with my fake snowflakes.  This was MESSY because the snowflakes want to fly EVERYWHERE.  Thank the Lord my children were nowhere in sight while I was doing this, as I cannot imagine the chaos that would have ensued had they seen this ridiculous fake snow that goes everywhere and sticks to everything!

After that, I put a piece of clear tape over the opening of my small ornament, and then put glue all over the tape.

I then stuck the small ornament to the large ornament to form Pierre’s body. He sort of has a giraffe neck, don’t you think?

To keep him cozy, I cut a little scarf out of craft felt, and glued that to his neck.

I then fashioned some arms out of pipe cleaners, glued some pom poms to his torso (for buttons) and face (for eyes, nose, and mouth), and plopped that cute little hat right onto his head.

Now that you’ve met Pierre, please go check out the other FANTASTIC clear ornament projects that my friends have made for our December DIY Challenge! Some are Christmasy, some are not, but they’re all FUN!

To see where I’m sharing this project, please click here.

I will paint anything. Really. But being totally honest, I was nervous to spray paint my bathroom faucet and tub fixtures. Thankfully, it was a HUGE success, and I can’t wait to show you the best way to spray paint a faucet and bathroom fixtures for a lasting finish! I completed this tub fixture painting […]

I could not believe my good luck when I found this beat up (but beautiful nonetheless) side table in the alley several weeks ago.  Granted, it was covered in dust, spider webs, and had spider egg sacks (PUKE) all over the bottom, but it was a great find!   Even my husband was impressed with […]

I just finished my DIY kitchen makeover, so it only makes sense that I would jump right in to another large makeover project.  Ha!  Truthfully, I am feeling the push to make over my kids’ bathroom because it’s also our guest bathroom . . . and we actually have guests coming to visit this summer!  […]